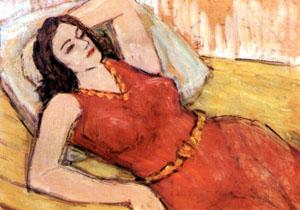 Pictures from the gallery The National Gallery, the museum’s permanent exhibition, is housed in the six rooms located on the  building’s first floor. Over 150 works of art (paintings and sculptures) are brought together in the exhibition’s representative selection structured on chronological and stylistic criteria, which illustrates in a rigorous and systematic approach the evolution of art in the Romanian artistic space.

The exhibition opens with portraits of the Brașov patriciate from the 18th century and The Portrait of Oprea Țârcă, leader of the shepards’ guild in Săcele. Among the representatives of Romanian academism: Mişu Popp, who painted the famous Portrait of Mihai Viteazul/ Michael The Brave (Ruler of Valahia and the first Unifier of the three Romanian Principalities in 1600), Constantin Lecca, Theodor Aman and Carol Storck are found in the exhibition. The painter Franz Neuhauser Junior, a master of Transylvanian landscape, created a large painting called The Panorama of Sibiu which documents a part of the city and its inhabitants in 1817. A Swiss painter established in Transylvania and then in Valahia, Heinrich Trenk, is a representative of Romanticism and his landscape Olt’s River Creek features in the exhibition. Three self-portraits immortalize three important painters active in Brașov in the second half of the 19th century: Mișu Popp, Wilhelm Kamner and Hans Bulhardt.

A large and valuable collection by the most famous Romanian painter, Nicolae Grigorescu, the master from Câmpina, including artworks from all stages of his creation is exhibited in the first two rooms. Convoy of Turkish Prisoners, Embellished Woman, Oxen Resting, Beach at the Ocean, French Peasant, Cherry Blossoms are among the most important creations.

Ion Andreescu and Ştefan Luchian are among the artists active in the period from the end of the 19th century and the beginning of the 20th century. Works such as: Forest Interior, Houses at the Edge of the Village, Anemone and A Gypsy’s Portrait are illustrative for the two masters of Romanian painting. The Romanian School of Painting in the first half of the twentieth century is represented by Ștefan Popescu, Theodor Pallady, Gheorghe Petraşcu, Iosif Iser, Nicholas Tonitza, Ion Ţuculescu, Francis Şirato, Alexandru Ciucurencu, Jean Al. Steriadi, Nicolae Dărăscu, etc. The exhibition also includes creations made by Dimitrie Paciurea and Ion Irimescu, important artists of Romanian sculpture. Names such Hans Eder and Hans Mattis-Teutsch from Brașov, as well as Maxy Hermann are linked to the Avant-garde movement.